We were recently contacted by the Rotor Riot crew and offered the chance to review the new Hypetrain Riot Control flight controller. Hypetrain is the brand name for products developed in close connection with the Rotor Riot pilots of YouTube fame. Whether or not you like their videos, you have to recognize the considerable talent pool they collectively represent. As such, I have high expectations for their products and was excited to give the Riot Control a try.

The Riot Control comes in a nice plastic case with plenty of padding. In addition to the flight controller, you get some JST connectors, mounting hardware, a buzzer and a premium XT-60 female connector with a pre-soldered pigtail.

The manual that comes with the Riot Control is one of the best I’ve ever read – bravo to Hypetrain for this.

The flight controller also comes with a printed quick start guide which documents all of the pins and what they do. It also points to an extensive manual available online. I know that manuals are not the sexiest thing, but I really want to commend Hypetrain on this document — it is extremely well written. It clearly documents every step you will need to complete when building the electronics portion of  your quadcopter. This includes sections for different ESC types, receivers, FPV cameras, etc. Despite the fact that Propwashed got much of its popularity due to poor documentation standard in this hobby, I am very glad to see this trend is changing with flight controllers.

On to the flight controller itself. Let’s start with specs:

These features are very similar to the DYS F4 Pro v2, which we think this FC may be derived from. It has a very similar layout to the DYS F4 Pro v2, with four pads for hooking up the ESC surrounding each mounting hole and two banks of soldering points on the front and rear of the flight controller. One bank consists of through-holes which are used for RX connections, UART3 and accessory power. The other bank consists of perforated pads which are used for UART6 and OSD connections including 9V power. All the pads you will use are on the edges of the board.

Where this flight controller deviates from the DYS F4 Pro v2 is the soft mounted gyro. The MPU6000 gyro is encased in plastic and screwed into a soft mounting structure in the center of the board. It connects to the board with a ribbon cable. Unlike other FCs that have this mounting style, the ribbon cable is fed from the MCU connector on the bottom of the FC through a slit cut into the silicone to the top. This presumably lessens the possibility of the ribbon cable being torn out or cut apart in a violent crash. The other deviation from the DYS FC is the battery connectors, which protrude from the side of the FC. I prefer this style, personally.

Since the manual for the Riot Control is so good, I really don’t think there is much point in writing up a detailed build guide – just go check out their manual!

One thing that put me off about this flight controller is the on-board labeling of pads is not very good. Some pads are labeled, but the majority of them are not. Luckily, the documentation for the FC is superb, so you shouldn’t have any trouble figuring it out. Here is the wiring guide that can be found on their site: 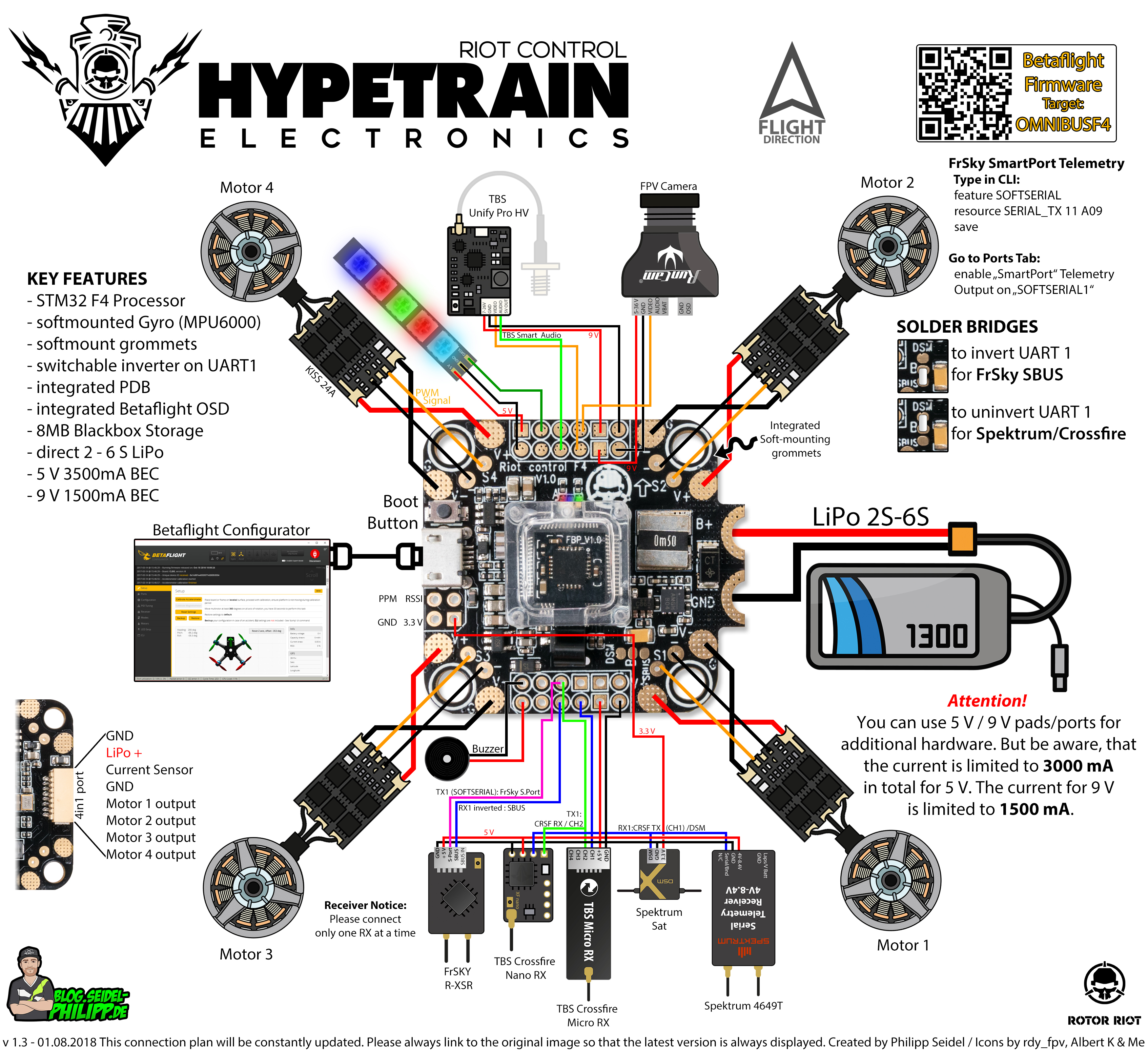 Make sure you complete the solder bridge to select your inversion preference for UART1.

The one “gotcha” that I ran into is that the Riot Control uses a set of soldering pads to allow you to select whether or not UART1 RX is inverted. You will want to set this to inverted (labeled “SBUS”) for FrSky receivers, and uninverted (labeled “DSM”) for all others. If you do not do this, the RX1 pin will not work. To the right is a picture of the bridge set up for un-inverted operation, which is what my CrossFire RX uses.

I chose to install the Riot Control in my Chameleon. I replaced the Betaflight F4 that I installed in that quadcopter last year. The two flight controllers are pretty similar, so the Riot Control was pretty much a drop in replacement — or as close to “drop in” as you can get in the miniquad world. Here is the FC installed before I tidied up the wires and zipped everything up:

For reference, here is the current equipment I am using in my Chameleon:

Again, I don’t have much to add here that isn’t already covered in the manual that came with the FC and our Betaflight Configuration Guide. The only settings that were not covered in the manual were the VBAT and IBAT scale settings. I tuned these using a bench power meter that I know works. I ended up using a VBAT scale of 109, which was pretty close to stock. The current scale was way off: I used 700, which was almost double the stock setting. Make sure you adjust this!

For reference, here are some of the relevant settings I used for this review:

The bottom of the Riot Control FC.

As I mentioned before, the installation of this flight controller was painless. It was a quick replacement for the existing Betaflight F4 I had installed and the only “surprise” I encountered was having to bridge the solder pad to get RX1 working. Other than that, everything worked as expected on first power-up.

When it comes to flight performance, I often find that flight controllers are an all or nothing commodity: either they work correctly, or they don’t. Or they break. After a few hours of flight time, I’m comfortable saying that the Riot Control lives in the first category. After installation and set-up, I only experienced one problem: I was getting some video distortion when flying at high throttle settings.

To see if I could fix that, I moved my VTX to be powered from VBAT instead of the 9V line that Hypetrain suggests in their manual. This improved things noticeably, bringing performance on par with what I was seeing with the Betaflight F4 that was previously in this quad. I want to note that this quadcopter has always had video noise issues. I have isolated this problem down to the motors and it can be improved by adding big capacitors to the quadcopter. Whether or not you have these problems, I would say if you are using a VTX that can take 4S battery voltage, you should use VBAT rather than the 9V provided by the flight controller.

Other than the video distortion, everything else was as expected. Flight performance was unremarkable (that’s what you want when it comes to flight controllers). I can’t say I noticed any improvement in performance with the soft mounted gyro. This quadcopter formerly had a Betaflight F4 flight controller in it with all the same components. The Betaflight did not have a soft mounted gyro. I don’t think that it flies any better now that it has the Riot Control.

The Hypetrain Riot Control is an impressive flight controller. When looking at features, it checks every box I could ever want from an F4 flight controller. It has a kick-ass pad layout to boot. I’m not convinced that the MPU6000 gyro needs the soft mounting structure that the Riot Control provides over competitors like the DYS F4 Pro v2, but I am sure that it can only improve performance. More importantly, by going with the Rotor Riot, you get an excellent manual and the great customer support which only an American company can provide.

For these reasons, I can recommend the Riot Control to pretty much any pilot. Beginners will be well served by the excellent manual, while pros will appreciate the extensive list of features.